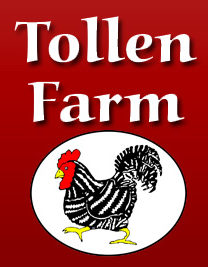 Discover an exciting array of flowers, herbs and other plants that will add natural beauty and color to your home and garden. You’ll find everything you need to enhance your outdoor living space, from containers and trellises to arbors and benches.

Although we offer plants for sale, we aren’t a nursery. Our main focus is on home and garden décor.

You can also select one of our “gardens to go!” These lovely groupings of plants available in a variety of interesting containers are an easy way to add color to your porch, deck or yard.

Our Commitment to the Environment

At Tollen Farm, we’re dedicated to being eco-friendly. Our apple and filbert orchards are never sprayed because we want to ensure our animals graze in chemical-free pastures. This is better for the market sheep we raise and for the people who come to visit us!

Tollen Farm began raising Hampshire Sheep since 1979. We sold breeding stock and market lambs. Three years ago we sold the last of our herd to make more room for the mini donkeys.

There is always something new to learn when you are raising livestock and we never stop learning!

We raise Mediterranean Miniature Donkeys to sell as family pets and guard animals for other livestock. We have been raising them since 1998. These adorable animals are especially fond of people – and carrots! As herd animals, the donkeys prefer to have friends, so we usually sell them in pairs.

Tollen Farm is a member of ADMS, the American Donkey and Mule Society. All of our donkeys are registered animals with ADMS. The pedigrees on some of our donkeys go back to animals that came from Sardinia which is the homeland of the Mediterranean Miniature Donkey. At the present time we have a good selection of donkeys on the farm. Female donkeys are called Jennys and males are called Jacks.

Donkeys come in a variety of coat shades; the most common one is Gray-Dun. We have Gray-Dun, Dark Brown, Slate Gray, and Red-Brown Jennys. Our herd stud Jack is a spotted by the name of “Cowboy.” His son, “Cisco Kid” is a dark brown Jack.

Every year on the third Saturday in May, from 1 to 4, Tollen Farm hosts a Donkey Birthday Party!

Come on out and enjoy the experience.

We guarantee that you will come again!

Be sure to bring your camera!

Why do we raise them? Mini donkeys have very nice laid back friendly personalities. They LOVE people! They consider you part of their herd. They come to you instead of running the other way. Donkeys are ”easy keepers”, which means that caring for them is not difficult or expensive, unlike some other equine species can turn out to be. They are good with kids. Minis can carry up to 75 pounds and pull 500 pounds when full grown. They are also used as guard animals with other livestock, such as sheep.

Tonie and a friend saw an article in the paper and on a web site, regarding a group of abandoned horses that were to be auctioned off at a farm in Molalla, Oregon. They decided to go to the sale, but had no intention of buying any horses-they were simply curious about them. Tonie’s friend had grown up on a farm and had horses, she, on the other hand, had ridden horses as a kid, but never owned a one.

When they saw the animals, they were hooked.

Tonie bought one horse and her friend bought three with the intention of finding them good homes.

Neither one of them had a horse trailer or any way to transport the animals! The next day, the 4 horses were delivered to Tollen Farm for safe keeping until fences could be built at the other farm.

The three Mares purchased by Tonie’s friend soon became a large part of her livestock family. Her friend could see this clearly.

One day he told her that he could see how much they loved her and she loved them and he wanted her to have then all!

WOW, she was blown away! She had wanted a horse all her life and NOW SHE HAD 4!!!

The mares are all Arabians. Two are full blood and 2 are half. One of the full bloods is a pure Polish Arabian sired by SS HYPNOTIC.

The other Arabian mare is a grand daughter of HUCKELBERRY BEY.

Even though getting to know each horse and their personalities has been a challenge, it has been very enjoyable as each one is different.

HUCKSTER, (Huck as we call her around here), is the boss. All she has to do is lay back her ears and everyone else moves out of the way. She used to try to buffalo Tonie too, but has discovered that won’t work so she follows her around like a puppy dog. “Huck” used to jump at every little thing and run around rearing up at all the fence lines – now she just does it to show off.

“LITTLE GIRL” is the youngest mare. She used to act like a baby because she was, she was only 2 when we got her. She is the sweetest of all four horses and loves kids. She is friendly and loves attention although she steers clear when Huckster is nearby!

POLLY is a pure Polish Arabian. She was not willing to be touched when she arrived. She would not let Tonie brush her without trying to bite her and she was cautious around other people. She never came up to be petted and was hard to catch and halter, and still is. And forget checking her feet! Now she likes to be brushed, and will lift her feet to be checked and trimmed. She has come a long way.

Now she loves kids and is always the first one to the fence to check out small visitors. Nothing fazes her anymore. She has settled in and is the “get along with everyone” horse.

Two of the horses have been broke to ride although their main goal is to look pretty and be happy.  Come visit us!

Jamocha Almond Fudge was born here on the farm in the summer of 2008.

She lost her mother when she was only 10 weeks old.

Tonie and an old momma ewe became her closest friends.

She spent the first winter of her life with old momma ewe, Comanche Moon, (a little jack donkey who’s momma died on New Year’s Day when he was just a few months old,) and 3 ewe lambs. She bonded with all of them but really considered the old ewe her special responsibility!

Everywhere that ewe went, Jamocha had her eye on her.

One day old momma stumbled and fell and Jamocha ran over to her to see if she was ok. She stayed with her until she got back up and was walking around.

When she was younger and people came to the farm to visit, she always checked everyone out. She would come up to the fence and sniff your face and give you “llama kisses”. Nowadays do not attempt to pet her. Just let her come to you. LLamas are very protective of their “charges”. She tends to spit on all visitors that get too close.

Our two Romanian/Husky sheep dogs are very friendly. They will NOT jump on you but they will greet you if they are out.

They always let us know when someone is here.

The two are full sisters and have lived here on the farm since they were 8 weeks old. They LOVE chasing squirrels!

OH, they also like to DIG for gophers and moles. Their ears are so tuned that they can hear those critters working under ground!

Watch where you walk so you don’t fall in one of their current projects!

UPDATE ON THE GIRLS

We lost Baby in 2016. Dolly is happily watching over the farm as of this date and will greet you with a tail wag if she’s feeling frisky. After all, she’s getting older!